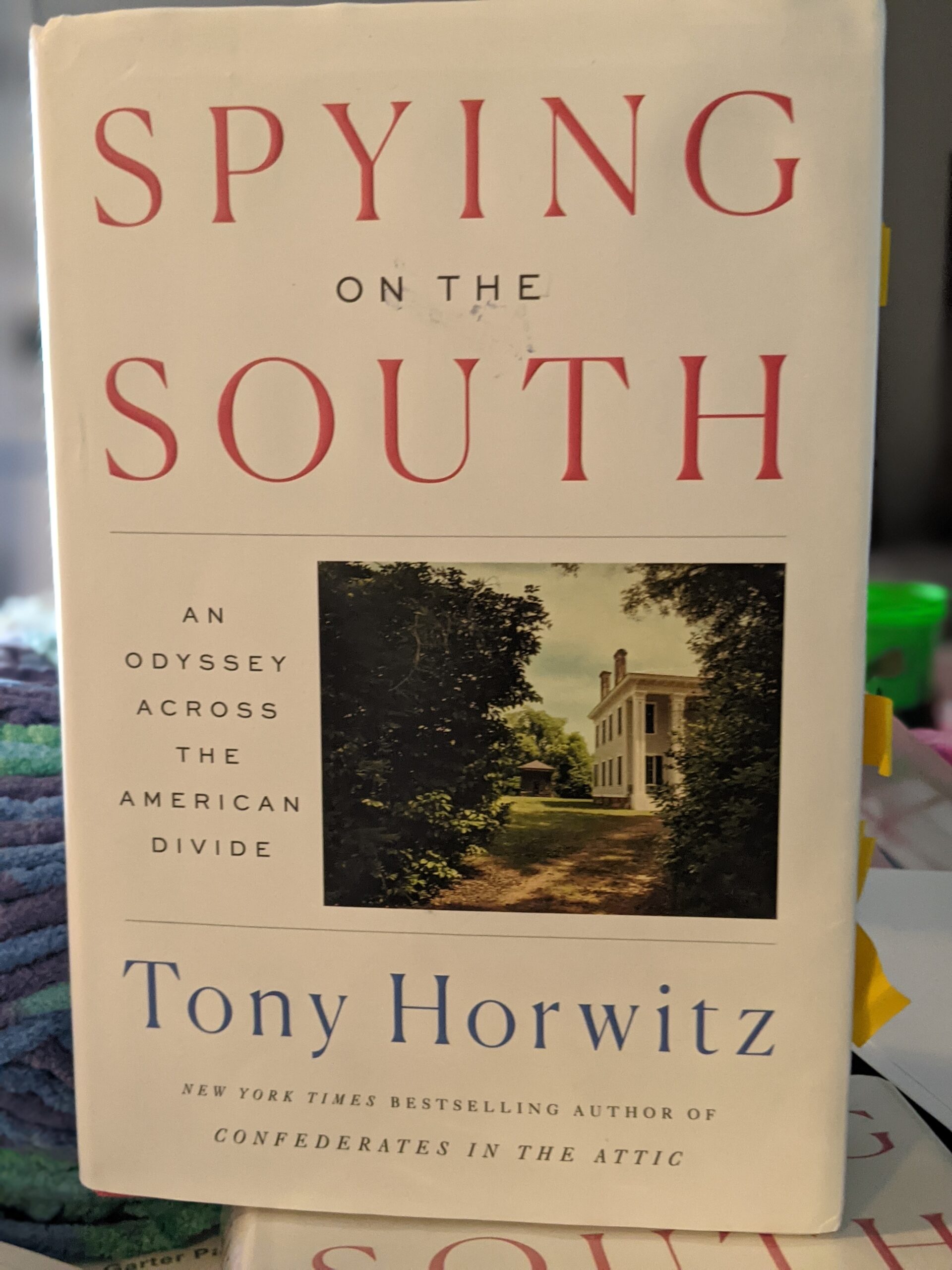 A Southern Gal’s Take on “Spying on the South”

The farthest north I’ve ever been is Washington, D.C., and as Hamilton taught us all not that long ago, that’s still the South. Though I reckon a lot of us deep Southerners would have a few words to say about that. So, when I joined a book club recently and the first read was Tony Horwitz’s “Spying on the South: An Odyssey Across the American Divide,” a book about a Yankee trekking across the South, I was intrigued to say the least.

For most of my life, I’ve been an ambivalent Southerner, having only really settled into the identity as I’ve settled into being a mother and a writer. I spent the majority of my life reading about far flung places, and working hard at school so I could get out of my small backwater hometown. My teen years involved the purposeful wiping away of my Southern accent, which was a little bit scarlet O’Hara and a lotta bit redneck. One of my proudest memories as a young college student was when a professor asked me where I came from and was convinced I couldn’t be from the South. Neutral America is what he heard in my voice. But I still don’t like it too much when people trash the South. So, pretty early in, I was a little defensive when it seemed neither Horwitz nor his protege Frederick Law Olmsted liked the South much – even if they’ve both made a tidy profit off of it. There’s only so much corn pone insulting a born and bred Southern gal can take.

That defensiveness, along with several other reasons, made me hesitant to write this review. One of the strongest reasons was that I found out Horwitz has passed on since he published the book, God rest his soul. We learn toward the end of the book that he’s spent almost three years traversing the South. The weight of that much time spent away from his family and his death such a short time afterward weighed heavily on my mind. I also thought it might put a rose-colored spin on my review. But the fact that non-fiction books aren’t my normal cup of tea should balance it out. I think.

The premise of this book is that Horwitz follows the trail of Olmsted, who spent several years traveling in the South in the 1850s shortly before the Civil War. Having never spent any time in the South, Horwitz studied Olmsted’s extensive writing on the subject and offered a comparison of their two similar but different journeys.

Horwitz offered journalistic, sometimes wild accounts of his encounters with people from the Rust Belt, down through Kentucky and Tennessee, down the Ohio and Mississippi Rivers, and deep into Louisiana and Texas. He tried to follow Olmsted’s route as closely as possible, which considering the century long interlude led to some interesting conundrums. One such intriguing dilemma came early. Olmsted took a boat down the Ohio River, which is no longer available. Not willing to divert, Horwitz using his journalistic credentials booked passage on a coal barge. He learned a great deal about the dying coal industry, and many other strange diversions resulted in meeting salt of the Earth, everyday people like this. His exposition often resulted in laugh out loud humours accounts of events that most people – even in the South – would like find unusual, like his unexpected venture to the moonshine and homemade Monster truck fueled Mud Fest in Central Louisiana or his time spent riding a donkey through German country in Texas. I can admit to having relatives who go mudding, yes, I can vouch for that particular activity existing. But, no, I can’t explain the appeal either.

But buried deep among the humor and Horwitz’s attempt to blend in and learn was a clear political commentary that couldn’t be avoided because of his timing. Horwitz hails from an area of the country that is deeply blue, and he was traveling deep into red country right before the 2016 presidential election – the outcome of which was unexpected by many. But Horwitz met plenty of his journeys that were supporters of our former president. They expressed an anger with the political machine in Washington and thought maybe Trump could fix it.

Like his predecessor Olmsted, Horwitz didn’t seem to think highly of his Southern neighbors. Both frequently insulted the food in the South, Horwitz even going as far – in a joking manner – to blame a traveling companion’s coronary on Louisiana travels. But anyone from New Orleans could tell you they picked the wrong food. Southerners have a lot more to offer than the fried nonsense filling the plates of Horwitz and his short-term Australian traveling companion. Without saying as much, they often implied that Southerners weren’t as intelligent. Horwitz focused a great deal on the corruption of Louisiana’s political system, and not a lot on anything good we had to offer – even in New Orleans, our shining jewel. Throughout the book, you often wondered, why do people stay there, in almost every place they were. Now, in Central Louisiana, where I’m from, I agreed with him wholehearted. I don’t know why people stay there. But New Orleans is great. San Antonio and Austin are pretty great.

Though this seems like a great place to point out that both Horwitz and Olmsted seemed to have quite a random affection for only Texas – a place that many “true” Southerners hold as a different place altogether, anyway. My book club even had a brief discussion to the tune of Texas being a different kind of South. Additionally, it was odd to me that states like Arkansas, Alabama, George, that are more Southern – sometimes considered more Southern than Louisiana (though I promise if you meet people from the right parts of Louisiana, we’re Southern) weren’t explored at all. And what about Florida Man? I understand Horwitz was just following Olmsted’s lead, but I don’t understand what happened with this choice in the first place. Leaving out so much of the South and then being lauded by so many as having written an “indispensable” study of the South that was used in college classrooms and research at least into the 1980s when Horwitz was in school seems awful.

All of this was at least contracted with some positives. We saw the current owner of a plantation trying to bring honest light to the horrid nature of slavery; a homeless man with simple dreams of a better life; a town in Mississippi with strong Jewish roots; and a church in New Orleans that welcomed everyone. There were many examples of the Southern hospitality and spirit that I as a Southerner know is real. And, yes, there were references, and light shined on the horrible history of slavery, especially in the South. It is a reality and as Horwitz pointed out, the “polite” South likes to pretend it didn’t happen. Politeness is king in the South, and we have a lot of learning to do.

But honestly, overall I think almost everyone can take something away from this book. I’ve encouraged my husband, who isn’t much of a reader, to pick it up because this takes a look at the aspects of being a poor, small town Southerner that are foreign to him as a city boy. If you’re a Southerner, I think it’s worth a look to see how these two Northerners interpreted their experiences. Northerners and foreigners could get a taste of the South, though I’m a little hesitant to suggest it to y’all because I’m not sure how balanced of a view it is. But maybe consider a visit anyway, no matter how you feel after reading this book.

The extensive use of Olmsted’s writing made portions of the book drag along, and I looked forward to the next bit of Horwitz’s fresh perspective. Horwitz was a wonderful writer, had witty insights, and knew how to capture things humorously. I wish he’d been better able to hide some of his dislike for the South, because I don’t really think he meant for it to come through. But the South isn’t for everyone, and if you don’t like it, we don’t want you. So, Mr. Horwitz and Mr. Olmsted, rest in peace in your cold, Northern cities. Thanks for stopping by, but we’ll handle our own PR.